5 years ago now I did a talk on civilian drone platforms being used on the battle field. Given the advancements in the ROS landscape, it is clear the talk could be dusted off, and given a fresh touch of paint. Much of what was said then is directly applicable to this community today.

Many of the companies, and individuals involved in early drone technology liked to ignore the dual use nature of their work. Fast forward to today, and we’ve got one of the key players in the discussion being lauded as having products that are a ‘True Symbol of Modern Warfare’. The crows have come home to roost as the saying goes. 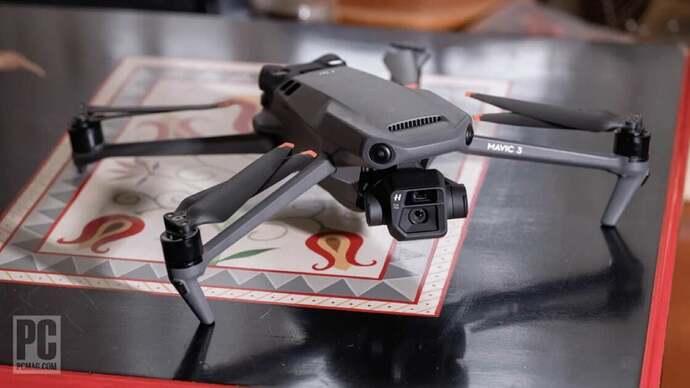 Whether DJI likes it or not, Russia loves its drone for their military capabilities.

We here in the ROS community are at this same crossroads, and the future looks bleak if we continue to ignore the facts on hand. More importantly we will have a rude awakening if we continue to listen to the rhetoric being put forth by the key players here today.

We’ve had a beautiful facade constructed for us over the past few years. The initial brush strokes were laid down in 2014 with ClearPath at the helm. 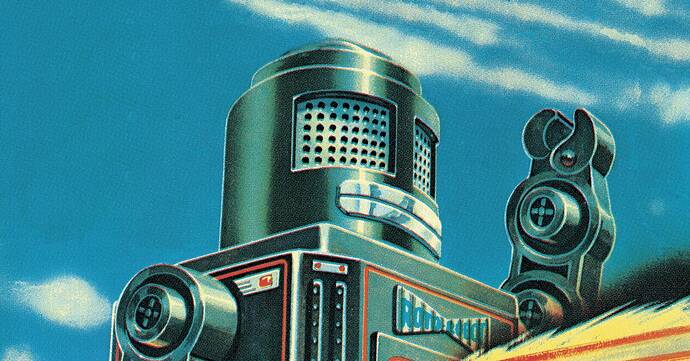 Clearpath Robotics is a 80-person company founded six years ago by three college buddies who had a passion for machine building. They specialize in all-terrain test vehicles, such as the Husky, a stout four-wheeled robot vehicle that’s used by the... 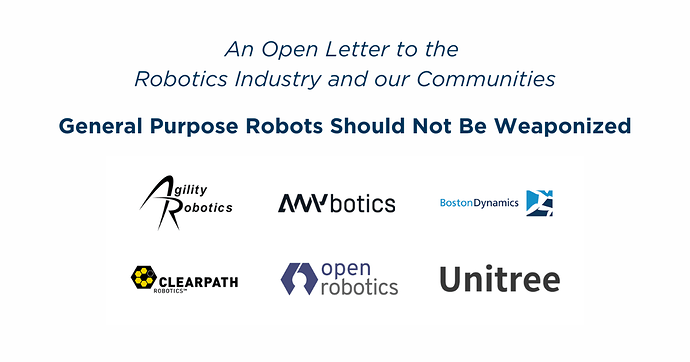 Today we join five other leading robotics companies in pledging that we will not weaponize our advanced-mobility general-purpose robots or the software we develop that enables advanced robotics and we will not support others to do so.

All of this is of course tied into the StopKillerRobots campaign, and exactly where the weird line in the sand begins. Military and killer robots - Stop Killer Robots
“Stop Killer Robots is not seeking to ban weapons that operate under meaningful human control. We are not opposed to artificial intelligence (AI) or robotics broadly, or even to the use of AI or robotics by the military. We are not proposing a ban on systems without weaponry designed to save lives, such as autonomous explosive ordnance disposal systems, which may operate with or without human control. But we believe there is a line which should never be crossed: life and death decision making should not be delegated to machines”

For me personally examining the ClearPath version of the most recent announcement really frames the landscape:

Open Letter: General Purpose Robots Should Not Be Weaponized - Clearpath...

An Open Letter to the Robotics Industry and our Communities, We are some of the world’s leading companies dedicated to introducing new generations of advanced mobile robotics to society.  These new generations of robots are more accessible,...

“We pledge that we will not weaponize our advanced-mobility general-purpose robots or the software we develop that enables advanced robotics and we will not support others to do so.”

If we break down this pledge, we quickly see how it falls apart. In reality ClearPath as one of the signatories has already violated their pledge. They do “support” weaponization, period. In fact they actively support it through their dual use technology in both software, and hardware form. They are in good company right next to OpenRoboticsOrg none the less. 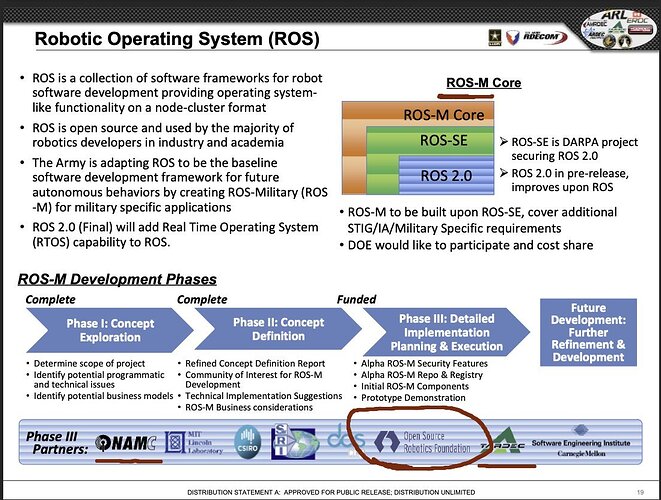 The beauty of dual use is that you get to tout your prowess, all the while ignoring the the fact that what you are doing can be used for “weaponization”. Take for example the Spot ROS package, it seems completely harmless in and of itself, right? 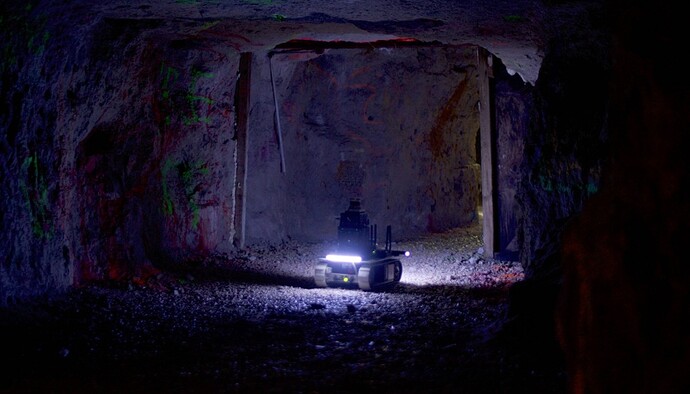 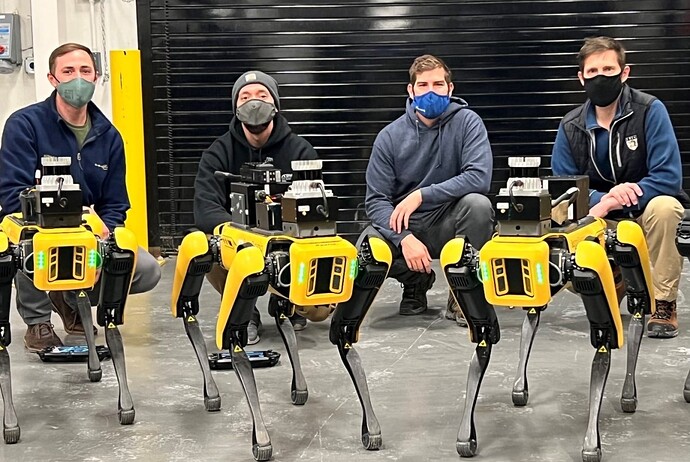 Tell me with a straight face no one at Boston Dynamics, or Open Robotics, or Clearpath helped “support” getting RTK-Lite onto Spot for GVSC? What’s the big deal anyway? What even is RTK?

Eventually you’ll find all the fun stuff like ARES, and WINGMAN (an automated gunner platform), and start scratching your head a bit. “ARES, like RTK, relies on the ROS framework as the backbone of the system.”

Next thing ya know you are discussing CoVeR, and RCV (robotic combat vehicle), and all sorts of fun things that are in fact directly supported by the ROS landscape, and many of the folks here.

Supporting the Warfighter Machine Interface is one of the primary roles of ROS for military use.

Many of you got suckered into an “Open competition to industry to develop purpose built unmanned platform…” for the military.

You are part of a “Supplier Ecosystem” for weaponization of ROS. How do you feel about that? 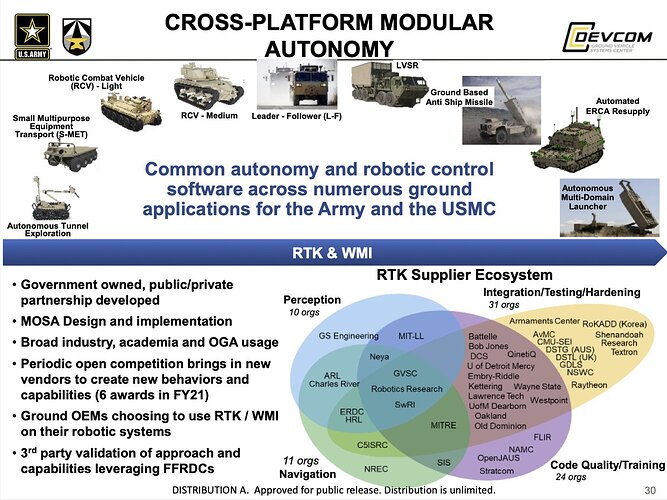 Meanwhile some people in the ROS community are trying to chastise me for putting a GelBlaster on the back of my Unitree go1… I just don’t get it. 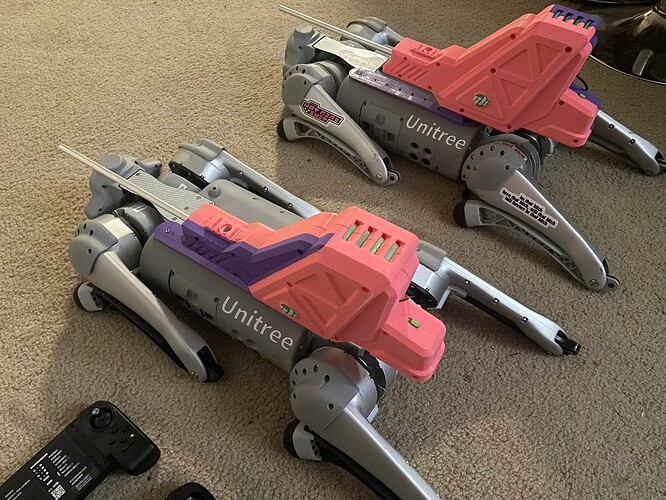 Am I the only one that sees hypocrisy here? “real goal for UR Army is to leverage the technology to instrument their fighting vehicles, including the RCV (robotic combat vehicle)”, supported by ClearPath.
https://www.ge.com/news/reports/everywhere-you-go-ge-researchers-are-building-ai-brain-army’s-unmanned-vehicles

Army researchers are advancing the robot-human partnership for warfighting environments.

Literally using ClearPath Husky & Warthog for RCV logic with a known “Direct Transition to Robotic Combat Vehicle Programs”. What are we even talking about with this Boston Dynamics letter a number of you helped pen, all the while being part of the “RTK Supplier Ecosystem”?

We’ve got a lot to discuss… I hope at least a few of you are able to engage your brains and see the HUGE conflict of interests, and the lines you all are tap dancing on. 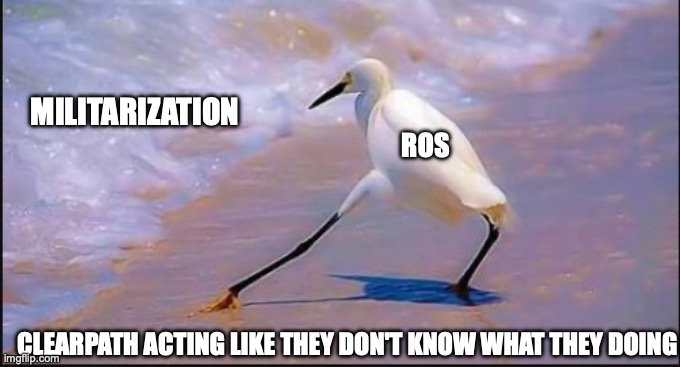 “designed to save lives” is where we are hanging our hats right now… the coat tree is real shaky. What if I tell you I’m designing a home protection quadruped? Designed to save the lives of my family from home intruders, am I all good to NOT be chastised? or is that not how this works?

If nothing else I’ve learned of the existence of ROS-M today which isn’t cool for sure.