Can not find Ros2 drivers for Kinect v1

Lots of googling failed. Are there any way of using Kinect v1 depth camera with ros2 ? Have it up and running with Ros1.

Hi, that’s the same issue I have.
The only solution I guess is, to use a ros_bridge for the data/topics of the Kinect.

Maybe this is what you’re looking for. 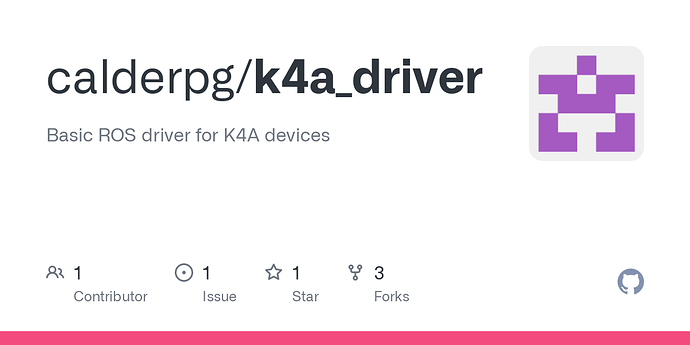 Basic ROS driver for K4A devices. Contribute to calderpg/k4a_driver development by creating an account on GitHub.

It may be harder than normal to install because the Azure Kinect Sensor SDK’s “[…] only supported distribution is Ubuntu 18.04”, but there are some tips on using other distro’s here: Requesting Binaries for 20.04 · Issue #1263 · microsoft/Azure-Kinect-Sensor-SDK · GitHub

There’s also this one, but it seems to be for a newer sensor only.

A ROS sensor driver for the Azure Kinect Developer Kit.

If you want an api to get images off your device, libfreenect (GitHub - OpenKinect/libfreenect: Drivers and libraries for the Xbox Kinect device on Windows, Linux, and OS X) is ROS version agnostic (assuming you are on linux or osx). But since you are asking about a ros2 version, I suppose you are looking for an implementation of a ros2 node that leverages an existing kinect v1 driver and publishes color and depth image topics? Some googling turned up this: GitHub - fadlio/kinect_ros2: C++ ROS2 driver for Kinect v1 (Xbox 360).
It is not too stale, and at the very least, could be a starting point for you.
Out of curiosity, what were you using in ros1?

On topic ‘jjdang’
I was indeed looking for leveraging an existing kinect v1 driver and publishes color and depth image topics.
Also bookmarked the link to test out as soon as I am home. Currently at work for another week.

what were you using in ros1?
I am backtracking, started building another bod BUT this time i am keeping a “robot built log” in the form of videos.
So I was using libfreenect drivers with freenect ros node to get depth info and such.
Then used Rtabmap for mapping and started with Vslam navigation also drive bod around using rgb camera from Kinect.
Similar to this:Pi4 Kinect 360 and Ros

I will be upgrading to ROS2 as soon as I get everything setup for ros2.
Wishfully thinking, Ros2 driver that does the topic publishing and added camera servo/motor control.

But thanks for the great help