I’ve been using Fusion 360 for designing the parts for my robots for a few years now but I’m self taught and therefore almost certainly not using it properly. One thing I’m keen on is using one of the URDF generation scripts as my robot is pretty complex it has a mecanum base, lifting torso on a four bar linkage, 3dof head, and two 6dof arms with end effectors. Essentially it’s Johnny Five but two foot tall.

I’ve tried manually creating a URDF and also generating one from within Unity using ROS# and it’s exporter, but it seems daft that I’m not doing this properly in CAD such that it can generate them itself.

Does anyone know of a good tutorial for Fusion 360 that is a good basis for robot design please? I’m almost certain I’m not using components or anything else correctly so assume I know nothing and you’ll be on the right track!

Picture added for attention, context, and because I’m proud of it and like showing off.

He’s wearing his off-road wheels in this photo, the next bit of work is the redesign of the arms to use Dynamixel’s so the nasty wiring will go away in a future version too. 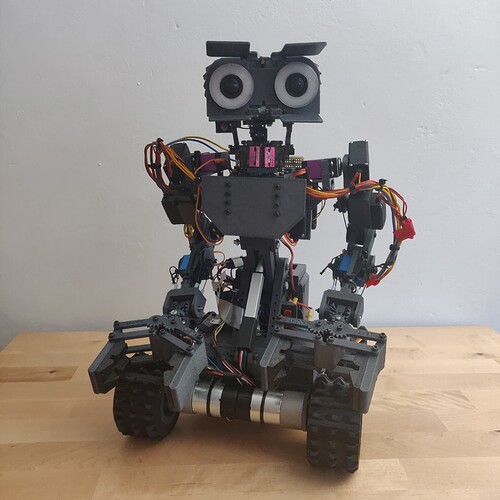 Looks like Pranshu Tople has a good tutorial for this, still need to learn to use Fusion 360 better but this looks like and excellent thing to aim to use

My suggestion would be to look at the URDF converter first to learn what rules/styling they expect you to follow (I’ve not used the Fusion360 exporter, but the Solidworks exporter had a bunch of assumptions built into it, and so it really helped to construct the model in certain ways).

Once you know how the exporter wants you to build a model, you can probably find lots of (non-robot) Fusion 360 documentation. I expect there is very little robot/ROS specific training for Fusion 360 (the number of people building URDFs for robots is actually pretty small, and then the number of people using Fusion 360 would be even smaller).

I’ve been using Fusion 360 for a number of years, so unfortunately I’m not sure what the best tutorials out there are today - but I will also mention, for some of the newer/advanced features, Autodesk has some decent webinars recorded.

Thanks Mike, that’s great advice I hadn’t even considered!

To create a robot URDF from fusion 360 we have to use the Fusion to URDF plugin. Also, we need to follow a few design practices to get this plugin to work perfectly . For creating and naming components, the plugin is expecting at least one component with the name base_link , setting up the origin and orientation of the robot as per the ROS coordinate system, etc You can refer to this Tutorial to understand more.