There’ll probably be limited interest in this (since the route publishing part is still closed source atm) but in case anyone finds any of this useful, here’s a project I’ve been working on sporadically: 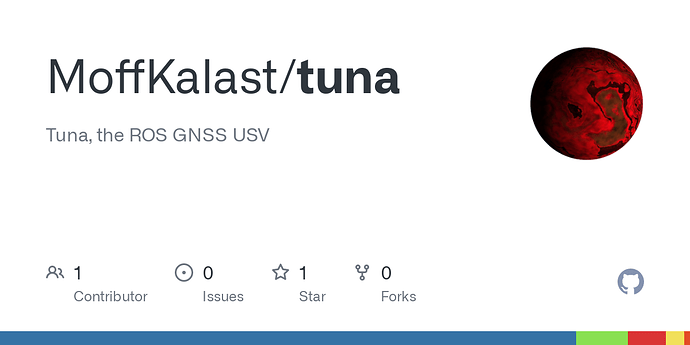 Tuna, the ROS GNSS USV. Contribute to MoffKalast/tuna development by creating an account on GitHub.

It’s a Noetic based, Pi 4 powered USV I made out of an old RC boat that uses a satnav receiver and an imu to follow move base goals.

I hope to eventually integrate the nav stack with IvP-helm and run it on a more proper hull for shoreline seafloor mapping, but that’s still a ways away.

Just wanted to say that this is awesome. What do you plan on using for shoreline mapping?

Well I have two different things in mind. I’ve noticed that it’s usually possible to see at up to 4-5 meters down from the surface in peak sunlight and clear water, so I could set up a camera that’s pointing directly downward from the boat, then use the localization data to transform and stitch images together, and publish it in real time to the gui.

Estimating something in the range of 2-3 m in translational covariance and a few degrees in rotation it should narrow down the complexity of stitching significantly I imagine. Or I could just stack the images in the detected orientations on the fly and do fine stitching later on if it takes too long. Should be interesting to see what works. I’m sure there’s also lots of projects that do this with flying drones that should be of some help.

The second part would be to get an actual side scan sonar, but I haven’t really found anything in my price range yet. Practically all manufacturers seem intent on selling a full stack solution with a display, logger, etc. that increases the price of just the transducers and driver like 10x.

I’m not a hardware expert, but maybe you could try building a transducer that you could connect to the Pi? Low-cost Hydrophone and Ultrasonic Transducer : 6 Steps - Instructables

You could start with a simple single beam depth sounder, then maybe try building an array of transducers to get the geometry needed for a sidescan sonar.

Now that looks super interesting, not sure how I’ve missed it before. It’ll take me weeks to properly comb through all of that, but at a glance some of those packages look like they would be quite useful, and udp_bridge even seems like an alternative for multimaster?

You could start with a simple single beam depth sounder, then maybe try building an array of transducers to get the geometry needed for a sidescan sonar.

. I’m sure it’s not that simple to get good readouts, at least I haven’t seen anyone get confirmed good data out of any of those diy setups so I’m kinda sceptical.

Doing some research a while back I figured that going with a replacement transducer for a fishfinder like a TL88E, a XF02 or a TD1000KA would be the best bet for linear readings, but compared to land ones you’d need to run them at much higher frequencies and 110+ volts afaik. I’m not an EE guy either so I’m not entirely sure where to even start when it comes to designing a proper driver for something like that. The cheapest off the shelf ones are probably these, but that’s still not exactly affordable and hard to tell how legit it is either.